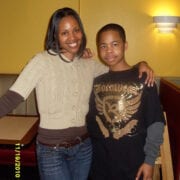 When I was 15, I got a new job. The summer before I had worked at a summer camp cleaning bathrooms and kitchenettes on a college campus for a summer program. I think the kids participating were my age. I wasn’t really old enough to work, but they hired us at 14 to do something I hated even doing at home. I really hated that job, but I did it.
The next summer when I was in a bedroom at my aunt’s house with my cousin’s friend, I had no idea I was about to take on a new job. The hardest job I would ever have in my life. A job that I didn’t apply for and would have for the rest of my life.
On February 4, 1995,  I officially joined the profession of being a mother. I was 15, and I was scared for lots of reasons.

But I didn’t think that I was clueless, and I was determined to excel at this new job. I was the oldest of my mother’s five children and had changed diapers and babysat my siblings. However, as each year went by, especially during the teenage years, I did feel clueless at times. Changing diapers was the easiest task I had as a mother.
Although I faced many challenges, becoming a mother showed me a love I never knew I could have and give.

Since that campus cleaning job, I’ve had several other jobs. Arby’s and Waffle House in high school. An internship at Hilton Hotels in college. The Memphis Grizzlies, ServiceMaster, and FedEx after college. And now entrepreneurship.
Each job had challenges. At times I was frustrated, confused, even sad and feeling like I wasn’t doing a good job. There were times that I wanted to quit because the jobs were hard and I felt that my work wasn’t appreciated. There were tears too sometimes, but there were so many more good times. There were laughs and conversations that let me know I was doing okay. I learned and grew and figured out who I was and figured out what my actual job was while I was doing it. Being a mother has been all of that times 100.

“Nothing is harder than trying to help someone figure out their identity while trying to maintain your own.” -Anonymous

And in my case, I was still trying to figure out my identity.
I wouldn’t trade my journey for the world. I thank God every day for the blessing to be a mother. And specifically to my super special, amazing son. And also a grandmother, known as Sunshine, to my wonderful granddaughter.

Becoming a mother changed my life in every way. And it gave me a different appreciation for my own mother. She had five children with distinct personalities and different challenges. As kids and as adults. But she somehow managed to raise us well while embracing our individuality. Sacrificing so much of herself, as mothers so often do.

I got a lot of my mother’s traits. She’s kind and compassionate, artistic and creative, witty and kind-hearted. And in a lot of ways we are completely different. She is way more reserved and patient than I am.
I love her for being the best mom she knows how to be. Just like I have done.

And I’m so blessed because I still have both of my grandmothers. One turned 92 last month, Grandma Ocie, and the other, Grandma (Agnes),  turned 95 two months ago.

These two mothers have close to 100 descendants between them. Combined they have almost two centuries of wisdom, challenges, and experiences. They are both mothers and women I aspire to be like. Strong, patient, kind, forgiving, loving. And they both are so funny. They have both experienced extreme highs and extreme lows as wives and mothers and endured.  So has my mother. And so many other mothers.
So to every mother who reads this whether you carried the child in your womb or only in your heart, whether you stay at home with your children or go to work every day. Happy Mother’s Day to you.  You are beautifully blessed and equipped to have the tough job of shaping the lives of your children. You never fully get the appreciation you deserve and certainly not the pay, but even in the trials the value of the reward (and sometimes the pain) of seeing your heart outside of your body cannot be measured or explained.
I salute you on Mother’s Day and every day.