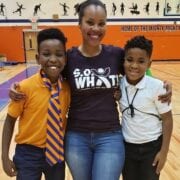 I am always humbled and honored when anyone takes the time to read my book. It is my story of becoming a mother at 15 and living and succeeding at life as a single mother. When adults read it, I appreciate the understanding and hope that they find nuggets to help them overcome obstacles they may face. When teen mothers read it, I’m excited and hope that they will find strength, encouragement and tips to make it with their babies. When teen girls read it, I hope they’ll understand the warnings, prevent unplanned pregnancies and latch on to the many other life lessons in the book.
And I love it when young men read it! I know it is full of lessons that they can use, but most boys don’t choose to read a  book about a girl’s life as a teen mother.
I was immediately impressed when I learned that 7th grader Tylyn Young was reading my book, but his journal entries on what he learned (and how well he wrote them) blew me away! I hope he gets the A I believe that he deserves!
Life After Birth RRJ #1
In this passage, I have learned numerous things. For instance, I learned about the value of family, showing appreciation, and how to spend money wisely. First, I learned more about the value of family. In this book, Ms. Summer Owens talks a lot about her family and how valuable they are to her. Her experiences have taught me how to value my family as well. For example, she states that her mother never left her side even though everyone else abandoned her because she was a pregnant teen.  Also, when Ms. Owens was going through labor, no one was there but her mother. This taught me that all I have is family. Even during my darkest times when my friends leave me, I will always have family.
Next, I learned how showing appreciation can make your life and someone else’s life a whole lot better. During Ms. Owens’s summer break, she would volunteer at a mental institution in Bolivar with her mother. While she volunteered, she did jobs for her mother’s co-workers. As she did the simplest tasks, she was often thanked by them. By the co-workers showing appreciation of what Summer did for them, she often made it her responsibility to take her time to do every task perfectly. This showed me how the smallest acts of appreciation could change someone’s entire demeanor about something.
Lastly, as I continued to read, I stumbled upon something that I found would greatly benefit me in the near future, how to spend money wisely. Instead of Ms. Owens going out and buying clothes and jewelry for herself, she was saving money to take care of her family. For instance, she would buy things for her newborn, Jaylan. These things included diapers, baby formula, rice cereal, clothes, water, baby bottles, pacifier, and other things she thought might have been necessary to take care of her baby. By her demonstrating this, it taught me that saving your money can benefit you in the long- run. Therefore when emergencies come, you’ll always have some extra money.
Life After Birth RRJ # 2
“I had a hard time leaving. I just could not believe it was real. The baby I had just brought home from the hospital was already in school. Eventually, I staggered out of the cafeteria, and, yes, a few tears released.
“Bye, mommy!” he excitedly stated as he sat on the round seat with his backpack still attached. Waving and swinging his dangling legs, he continued, “See you in a little bit.” “
I found that passage to be interesting because it showed how much Summer cared about her son, Jaylan. It also kind of shows a mirror effect of the time Summer was going off to college, and said, “…see you in a little bit.”, which is the exact same words Jaylan said to her, right before she left.
I noticed that Summer had a really hard time leaving her child at a school full of strangers, but this was nothing new. She even had a hard time leaving him with her very own mother, which was her immediate family. This showed me how much Ms. Owens really cared about the safety of her son.  She didn’t want to leave him anywhere where his life could be at stake for any reason. She ensured that he would be safe at all times. While she was in college, she would even call Jaylan every night and have a conversation with him, and ask him was he okay.
Jaylan also mirrored his mother as she was about to leave his new school. He repeated the exact same words his mother said to him right before she went off to college. That stood out to me because, now she probably knows how it felt to hear those words from anotther perspective. Also, I found it very amusing that Ms. Owens began to cry, and expected Jaylan to be crying as well, but he didn’t :).