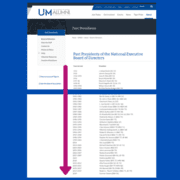 On January 20th, I sat like most of America watching history being made. Regardless of one’s political views, the fact remains that a woman and of color was in the position of Vice President of the United Stated- something my mother and certainly my grandmothers never thought they’d live to see.

Vice President Kamala Harris is on top, but she is at the bottom of a long list of white men who preceded her in that position.

I smiled to myself thinking about my position on the image below, at the bottom of the list of mostly white men. There are also a few white women, one black man, and one other black woman who assumed the role ten years ago late in her career.

I’m honored to be last on this list starting at 40 years old and to serve, to my surprise, as the current president of the National Alumni Association Board of Directors for the University of Memphis. The same university where my new friend Bertha Looney was one of the first black students and where the first black professor, Miriam DeCosta Willis, who I was privileged to know, was denied entrance.

I Will Not be the Last

Through February and March, I am excited to share my story of resilience and leadership for Black History Month and Women’s History Month programs.

Let’s talk about how I can inspire your organization, company, or school too!

Preparation for a New Beginning