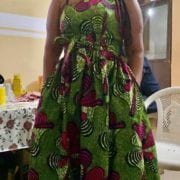 On the last day in Ghana, we packed up and checked out of the Airbnb. Because our flight wasn’t until almost midnight we headed to Justin’s parents house to unload our things and handle the last minute business of preparing to ship thousands of tiny handmade drums back with us to the United States. I have to admit, it has been very enlightening being a part of the process of seeing Justin, one of my mentors, and all of the elements of his new keynote speeches. Mama Helen was a tremendous help with the ENTIRE process, and it was beautiful watching this fiery Ghanaian woman do her thing.

Because work was still needed on his suits, we maneuvered through the Mokola Market crowd and traffic again to meet with the tailor. We were there much longer than expected and missed our opportunity to have dinner with the Fosus again.

But we did make it to pick up my dresses from the seamstress. Because it was #J15, January 15th, AKA Founders Day, I had planned to get cute and take a picture in my pink and green Ghanaian dress. Because we ended up rushing to the airport, I had to post the picture I had taken when I tried on the dress at the seamstress’s shop. I didn’t look my best, but my dresses were gorgeous! 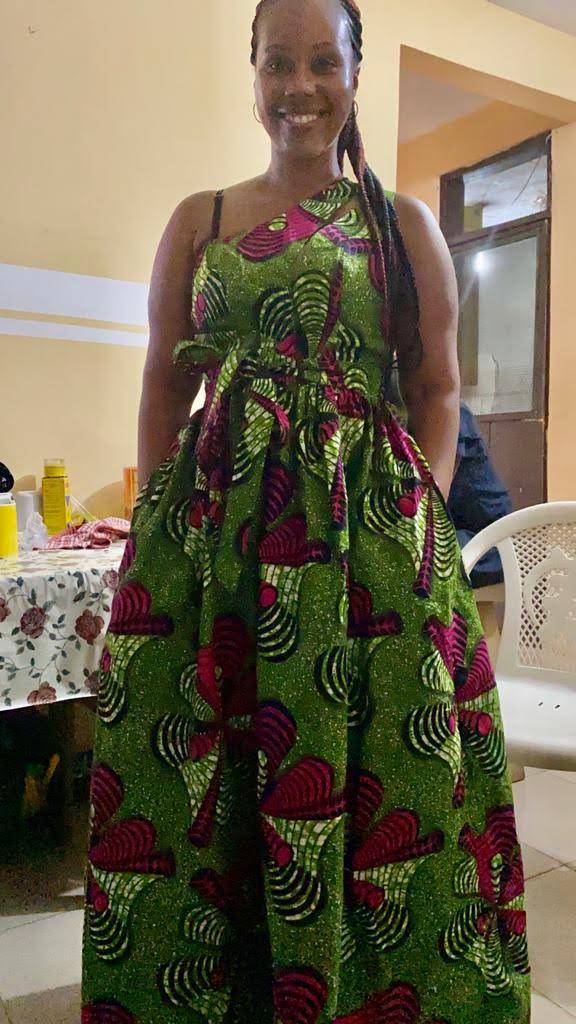 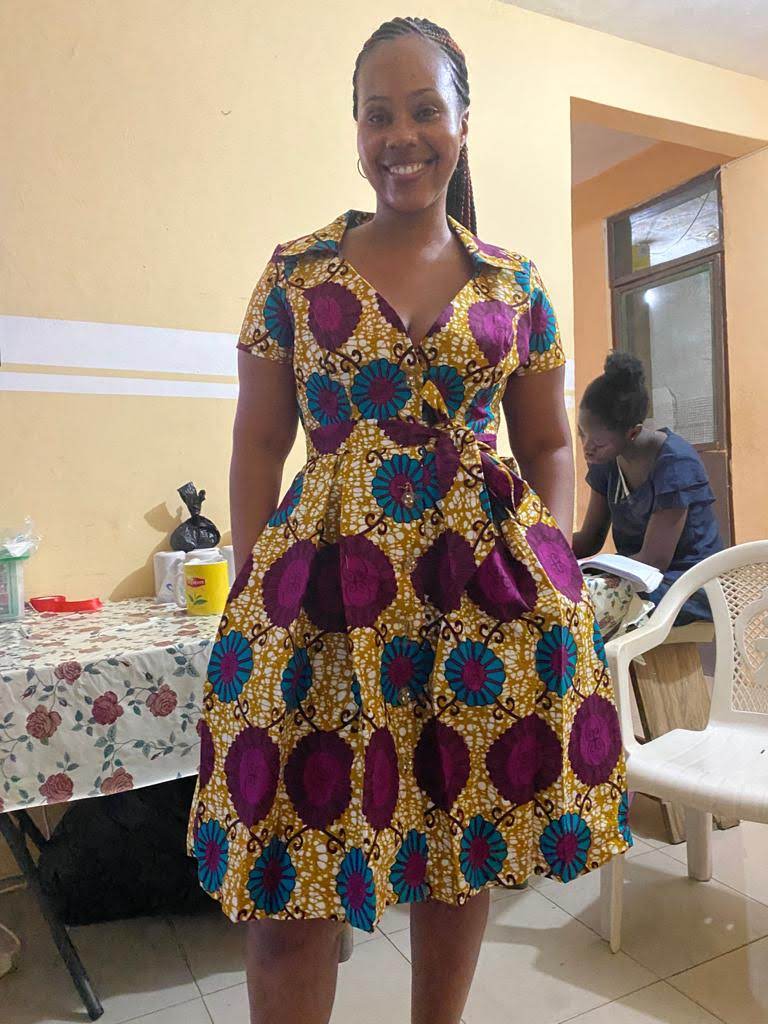 So then it was time to go. After 11 days in Ghana, it was time for my 24 hour journey back to Memphis. Valda was already gone so she missed this goodbye photo with the Fosus. 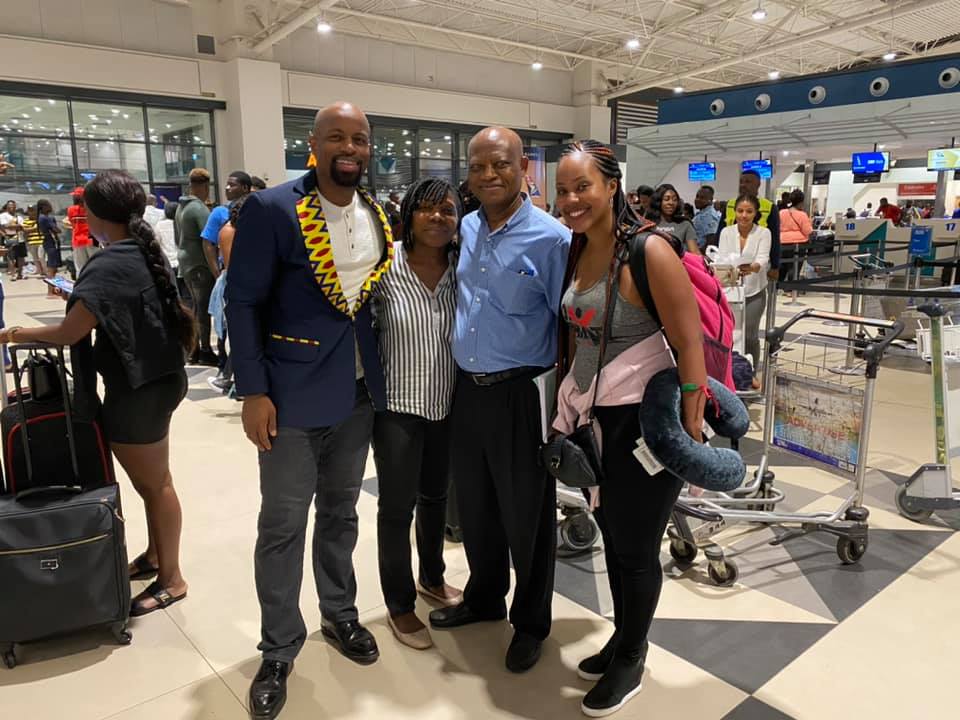 We had about six hours from Accra to London. Because we were rushing and close to missing our flight because of all the extra stuff we had to do for the international flight and shipping Justin’s drums, I didn’t have a chance to perform my normal ritual of emptying my bladder before I get on ANY plane. After probably close to a hundred flights, I have never had to use the bathroom on a plane. Well, that was over.

When we made it to London Heathrow airport, we had different wait times until our next flights but I ended up missing mine. I had slept, then ate, then worked, then slept, then read and decided to make my way over to my terminal after waiting with Justin at his. When I got to my terminal 45 minutes before my flight, they wouldn’t even let me enter. They were adamant that I wouldn’t make my flight and insisted that I see an agent to rebook me. I felt like I was in the twilight zone. I was so tired and so ready to be in my bed. Angels were looking over me because I got the nice agent. She rebooked me for free and I was going to make my same connection in Chicago, just arriving in Chicago a few hours later than expected. As the agent rebooked me, a mean male agent stood behind her yelling, as a cried…I was exhausted, frustrated and mad at myself. He called me dumb and said I must never fly and that he would not have changed my flight for free. I really couldn’t believe he was talking so badly to me, but I was just grateful I didn’t get him when I approached the counter. I got my new ticket and headed to my terminal. Unbelievably, I almost missed the flight again. Because the flight wasn’t for a few more hours, no gate had been assigned so I waited in a common area. The woman sitting closest to me laid across two seats and was sound asleep, and that looked so appealing. I set my alarm, leaned back and fell asleep. I awoke a few hours later only because a lady tapped me saying my alarm kept going off. I got myself together, ran to my gate which had been assigned, and got in line to board my eight-hour flight to Chicago. At this point, my layover in Chicago was short so I was rushing to get to my gate. I got another experience with some expedited process where I had to follow the orange badges throughout the airport to get to my gate on time. I know I got in nearly 20,000 steps in that 24-hour time period.

When I finally made it to Memphis, I got my two big bags and waited for my Uber ride. And this is who I got. 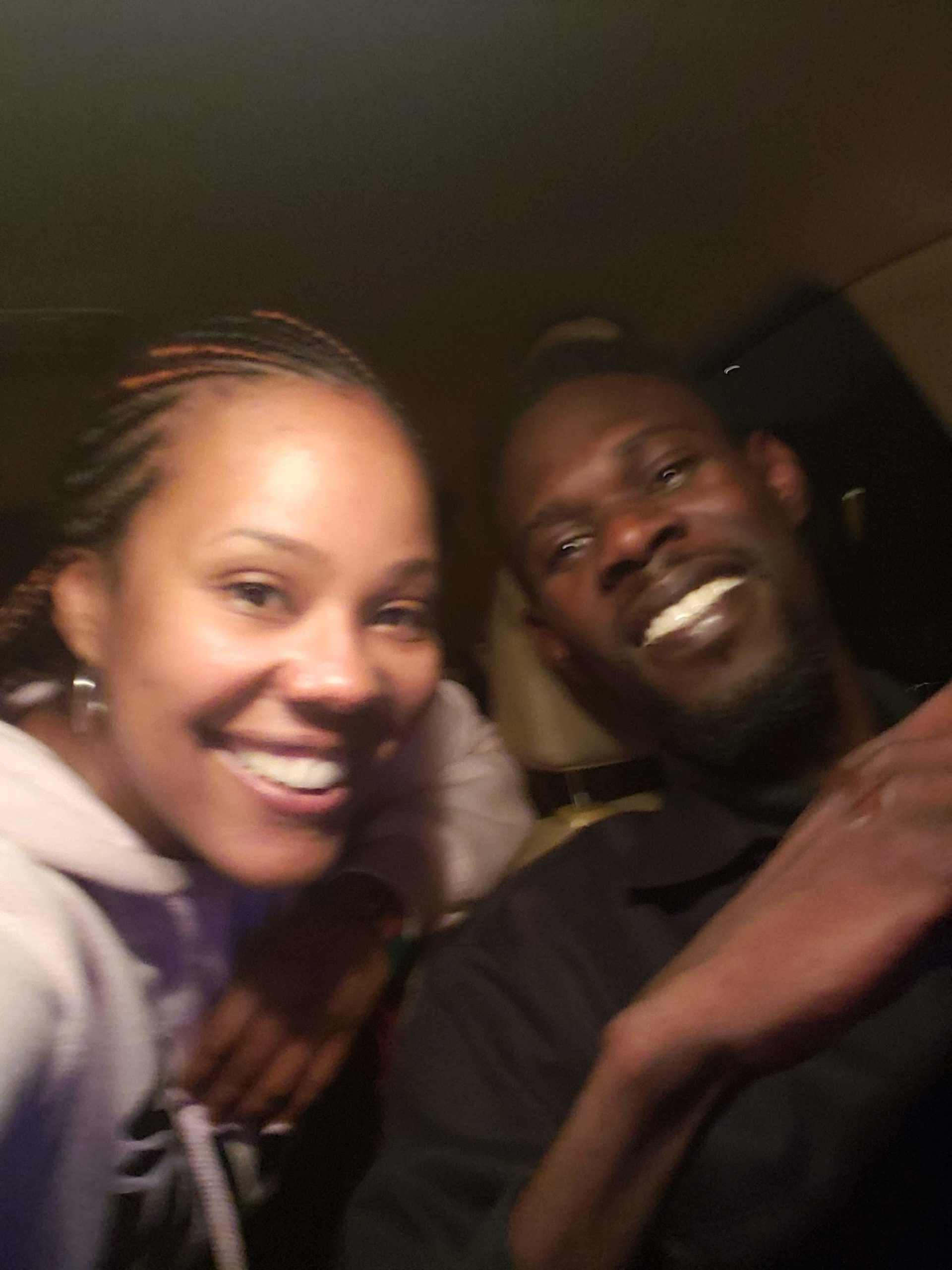 My Uber driver was from Senegal! I was exhausted but excited at the same time so my conversations about my African adventure continued!

My Journey to the Motherland- Accra, Ghana Day 10

10 Ways the Coronavirus is Forcing 2020 Vision
Scroll to top