I loved those jobs

didn’t think much about clocking in and clocking out until I got my internship with Doubletree Hotels and later Embassy Suites Hotels. I worked two days a week from 8:00 am-4:00 pm, and I just showed up and left. I did the same for a one-hour lunch break. I just left and came back to the office about an hour later. No clocking in or out. That felt pretty good.

After graduating from college, I went to work for the Memphis Grizzlies. There was no time clock there, but because we worked SO many hours I sometimes wished I was paid hourly rather than the little salary I got. But it was a trade-off for the incredible first job that started my awesome marketing career. I worked 8:00 am-5:00 pm PLUS worked as early as 5:00 am when I did media drops or took performers (WWE wrestlers, singers, Harlem Globetrotters, Disney on Ice characters, etc.) to be on morning shows.

Nights were long too when we had games and especially when we had a post-concert meet and greets. Those days which were pretty regular, I was happy to see my son and eventually my bed by midnight. I was still grateful for this job and learned SO much from the experience.

I went to work at another company as a marketing manager. Still no clocking in, but I had a set time to be in the office. I had an hour lunch break (and my co-workers and bosses made sure no one exceeded that hour), and we all (except some of the single men whose wives were taking care of the kids or the women who didn’t have children to get to) rushed out the door at 5:00. No need to clock out. Oh and with this job, I traveled at least once a month for three or four days. Sounds good except I had a child to take care of and trips sometimes even cut into my weekend. And I didn’t get to take a day off to make up for it. I was still grateful for this job and learned SO much from the experience.

Less than two years later, I found another incredible opportunity as a marketing advisor at FedEx.  I didn’t clock in, and overall the culture was pretty flexible. The focus was more on the work I produced and less on the amount and exact times I was in the office, but we did have office hours though. And that only made sense. So at night when I went to bed, I knew I had to get up and go to the office.

It was while I was at FedEx that my life changed.

I published my memoir, and the requests for me to speak began. I was nervous and shy, but I wanted to sell my book…so I spoke. And I loved it. I loved it because I could see light bulbs coming on in the eyes of the people in my audience. At every speaking engagement, I had a line of people wanting to talk to me to ask questions, share their story or just thank me.

And then I was asked to create a curriculum for my book.

So I did. Then I started implementing it. And I loved that too! I could see lives changing right before my eyes. I had found my calling. My purpose. The reason for each element of my beautifully chaotic life. At that point, everything I did in my role as a marketing advisor at FedEx became just a means to support my real purpose. I loved my job and everyone I worked with, but nothing I did there came close to the impact I had learned that I could make on the lives of others.

So I went to work every day, and I worked hard to continue doing a great job in advertising at FedEx. But all day long, I thought about more ways that I could help more people through the new business I had started, “S.O. What!”, Then I went home to be a mom to a growing, and um, challenging teenage son who I was raising alone. And I stayed up until 2 or 3 in the morning working on my business. And got up to go to work a few hours later…well, I got my son to school then went to work.

I was back to the long hours I had at the Grizzlies, but this time I had two jobs. And one was my PURPOSE.

After three years of knowing I was supposed to devote my whole self to S.O. What!, I said goodbye to Corporate America. That was June 5, 2013. 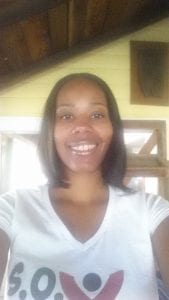 Leading up to that day, I was saving, praying, and preparing. I have always been a big saver but increased it even more saving every extra dime I could. I continued meeting people and making connections, and I worked on my ever-evolving business plan. And I prayed. I had enjoyed an amazing career in marketing and was working at an amazing company making a salary that, combined with my humble living, allowed me to save half of my check every pay period.

When the company announced voluntary buyouts to employees who had been there at least five years, I raised my hand knowing this was a sign that it was time for me to finally make my move. I had been there nearly six years. The money I would get from the buyout wasn’t much, but it was enough to pay my bills for maybe a year and I could focus on growing my business.

When I learned that I was not selected for the buyout, I thought about it for one day and decided…

it was STILL time for me to go.

Yes, I questioned if I had saved enough and how would I be able to afford health insurance. I wondered if it was smart for me to leave such a secure job that I actually enjoyed.

The year that followed was wonderful, humbling, and full of new challenges. But I never had to clock in. I got to decide what time I went to work and what time I got off (which is basically never because I am always thinking of ways to grow my business).

My savings sustained me for the first six months

I got even tighter with my money. I went from making a salary that allowed me to save from each paycheck more than I made each month in my new life as an entrepreneur. I saw the blessing in not having the money I had gotten used to having. It has been a humbling reminder of the start of my life as a young mom struggling to make ends meet. Being in this place again and working hard just to have enough to cover my bills helps me to help many of the people I work with who are there right now. I’ve been here before, and I know how to get to the other side. This situation just adds to my drive and helps me relate even more. It’s all great!

I was blessed when my friend, Naomi, asked to move in with me after her youngest son (my son’s best friend) graduated and went off to college. She wanted to relocate and was looking for the best opportunity and didn’t want a mortgage or a lease. She paid me rent, and that saved me…and my house.

Just as hard developing the business and other revenue streams. They didn’t come as quickly or as frequently as I counted on when I left FedEx. However, A Step Ahead Foundation had been a big supporter of mine and continued to be into my year of self-employment providing books to the clinics that provided their birth control. That was a HUGE blessing that helped sustain the business.
A third huge blessing that I received was Ciara.

A few months before my decision to leave FedEx, I got a new intern.

I met a young soror while I was speaking at the University of Memphis one day. I came across her again when I received the Prominent Black Women Award on campus.

She had graduated, was working as an event planner at a local florist but asked me to review her resume. I did and offered to give her some projects to provide her with more experience. She became my intern, and six months after I left FedEx she decided to leave her job and work with me full time as my much-needed assistant. Having her was a blessing, but the biggest blessing in it all was the fact that she worked for me even though I couldn’t really pay her…I wasn’t even paying myself. I was only able to give her a laughable monthly amount and offer her commission on speaking engagements and book sales. Since January, she has been by my side at every event, in meetings, and in my heart.  She believes in me and what we’re doing and has a heart for helping others too.

This year as a full-time entrepreneur (something I never even wanted to be), has been amazing. I have less money than I’ve had in thirteen years of being a professional but am more fulfilled than I’ve even been.

I’m sowing money. I’m sowing time. I’m sowing love. I’m sowing me. I know soon…very soon…will be harvest time because God’s hand has been over my entire journey. I believe that I am following His plan for my life, and that’s why He keeps on making a way for me.