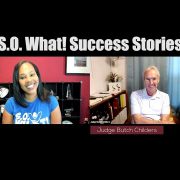 If never judge a book by its cover was a person, it would be Judge Robert “Butch” Childers.

I met Butch when I joined the University of Memphis National Alumni Association Board of Directors five years ago. He became the board president the year before I assumed the role as president. And I was amazed by his leadership style and his personality.

Because he was a judge, I expected him to be mostly serious, but he was mostly fun yet effective as our leader.

But it wasn’t until I became president, that I realized just how amazing he was. He had been a great leader, but for me, he was one of the best supporters I could have ever imagined having.

In this episode of S.O. What! Success Stories, I was blown away by the devastation. And loss I learned he has experienced throughout Judge Robert “Butch” Childers life. I was equally in awe of how he has used it to benefit others.

Remember, new S.O. What! Success Stories will be posted every Sunday so be sure to subscribe to my YouTube channel and don’t miss a single episode of these inspiring interviews!

S.O. What! Success Stories with Summer Owens is a series of casual conversations with overcomers about real life and resilience. Guests share their stories including some of the challenges they faced on their journeys to success. In each conversation, Summer breaks down the S.O. What! Success System and how implementing each of the elements leads to success in the face of even the greatest adversity.

The S.O. What! Success System

Learn more about Summer and how she helps individuals and organizations achieve S.O. What! Success.

Interested in having me speak to your group or at your next event? Just contact me, and get ready to say, “SO WHAT!”.