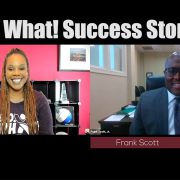 Have you ever met someone and immediately thought, “He (or she) is going to do something pretty amazing one day.”? Well, as a college student, I met Frank Scott who was also a college student.

But his poise and professionalism were different than even all of the other driven. And involved student leaders I chose to befriend.

Years later, I understood why and my assumption was right.

As the youngest mayor of Little Rock, Arkansas, Mayor Frank Scott. This man has set records and had some major accomplishments that statistically just weren’t supposed to happen for him.

In this episode of S.O. What! Success Stories, see how this first-generation college student became the mayor of his hometown and is making a major difference.

Remember, new S.O. What! Success Stories will be posted every Sunday so be sure to subscribe to my YouTube channel and don’t miss a single episode of these inspiring interviews!

S.O. What! Success Stories with Summer Owens is a series of casual conversations with overcomers about real life and resilience. Guests share their stories including some of the challenges they faced on their journeys to success. In each conversation, Summer breaks down the S.O. What! Success System and how implementing each of the elements leads to success in the face of even the greatest adversity.

The S.O. What! Success System

Learn more about Summer and how she helps individuals and organizations achieve S.O. What! Success.

From Abuse to Advocate. Olliette Murry-Drobot S.O. What! Success Story