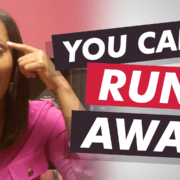 Teens run away from home because of family problems. I got into an argument with my stepfather and did the same. At the time, I was about five months pregnant. I thought physically leaving would solve my problems, but it didn’t. Instead, running and hiding only made my mother frantic as she tried to find me. I may have temporarily resolved the issue with my stepfather, but I was still pregnant and couldn’t get away from that. It didn’t matter if I was at my parents’ house or living with my grandparents’, the reality of the situation is I was about to become a mother.

Why teens run away

A word to any teenager who is fighting with their parents or like me isn’t getting along with their step parent, running away is never the answer. I am not talking about trying to get out of a hostile or dangerous environment which is a reason teens run away. I’m talking about situations where:

I was that way for a while before realizing things at home weren’t going to change unless I changed my mind, attitude and behaviour. Then I could handle the challenges which came my way. I could also act maturely and deal with myself, my issues, and my soon-to-be born child. If you are a teen who has thought of running away, why not learn from my example and get help from a trusted adult or trusted friend to resolve whatever you are trying to get away from. You might physically get out of a situation, but unless you deal with your thoughts and your heart, you’ll keep coming back to the same point.

The Power of Family and Teen Friendships