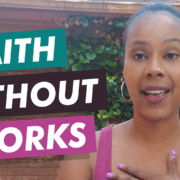 My secret to success is faith guided by works. As a woman of faith, I’ll be the first to admit that God is good. He took care of me and my son through many tough days. Sometimes when I struggled, I questioned what was happening and what I believe. But I held on to my faith. I also understood that my faith without works is void. That meant I had a part to play in my success. If I kept working hard, God would meet me where I was.

I was living in a different city away from my family. I had to work things out. This included child support which I never got from my baby’s father. I tried to get public assistance but was turned down because I had a car in my name. I had bought the car in high school never knowing it would be the reason I was denied public assistance.

Like with all things in my life, that denial of public assistance became another secret to success. When you can’t turn to anyone else to resolve your problems, you know you must work hard and rely on God. I had seen too many people forget that welfare was a temporary solution for a limited time. Instead, they became reliant on public assistance and were never able to break the cycle. I wanted a different life for me and my son. So, I became smart with my money. I only bought the necessities so I could survive without welfare or child support.

Can a broke college student who is also a parent make it without welfare or child support?

My answer is a big yes! The secret to success in that area is

What do you need to change or adjust to make it without child support or public assistance?

I made it work, you can too.

Work + Faith = my secret to success

How to Accept Help From Others